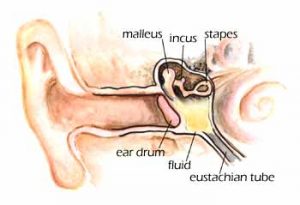 We have all experienced situations in which the Eustachian tube has not worked well. For example, the pressure we feel in our ears when riding the elevator in a tall building or during takeoff or landing in an airplane is a result of the Eustachian tube temporarily not allowing air in the middle ear to equalize with the surrounding environment.

In children, the Eustachian tube does not always functionally mature at the same level and may not work as efficiently as in adults for considerable periods of time. The adenoids are lymph node tissue adjacent to the nasal opening of the Eustachian tube in the nasopharynx and may prevent normal functioning of the tube due to inflammatory reactions. Allergies and sinus infections sometimes cause congestion around the opening of the tube and thereby impair its capacity to open properly. All of these factors can prevent air from entering the middle ear. When this occurs over a period of time, the air in the middle ear is absorbed by the body and replaced by a fluid. The fluid itself does not cause any damage to the ear although its presence can impair hearing as well as serve as a medium for bacteria to grow. When bacteria are present, it causes an infection, which is treated with an antibiotic. Although the antibiotic will cure the ear infection, the middle ear fluid may not clear. In some cases the fluid may resolve within six to eight weeks after the infection is treated with antibiotics, to restore hearing to normal levels.. If the fluid persists in the middle ear space then another infection can develop once the child is off the antibiotics. After repeated infections the bacteria may become resistant to certain antibiotics so another antibiotic is used.

Decongestants are infrequently used in an attempt to open the Eustachian tubes and drain the fluid from the middle ear. (Decongestants actually are generally less effective in children compared to adults). With marginal function of the Eustachian tube, a minor cold or other disturbance may then cause a repeat buildup of fluid and lead to another ear infection and decreased hearing due to middle ear fluid. 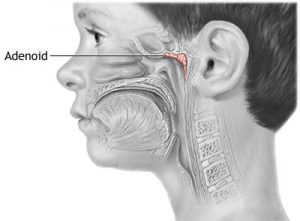 fluid. Therefore, additional intervention may be required. This is usually an operation; called a myringotomy and placement of pressure equalization (“PE” or “tympanostomy“) tubes. The operation is usually done in “Day Surgery” with the patient arriving at the hospital early in the morning and leaving later that same day. With the pediatric patient asleep, the surgeon makes a small incision in the eardrum and removes the fluid. A small plastic tube is then placed in the incision so that air can enter the middle ear to help the fluid evaporate to prevent it from accumulating. The cooperative adult can have this surgery under local anesthesia performed in the office.

The tube will remain in the eardrum for a variable length of time, ranging from three to 12 months, with an average of six months. In many children the tube will eventually be extruded and the incision in the eardrum will close. By this time the ear will have had a chance to resolve the chronic inflammatory state and the Eustachian tube will be better developed to function normally. In certain patients, an adenoidectomy (removal of the adenoid tissue adjacent to the Eustachian tube) is performed along with the myringotomy in an effort to assist normal Eustachian function. In other patients an allergic assessment, especially if the problem recurs, may be required to help alleviate the problem.