Dr. Kohan was brought in as a surgical specialist to work with a team of doctors, manufacturers and professionals to help restore hearing for an 8 year old girl from senegal. The New York Times provided a full summary of the surgery. 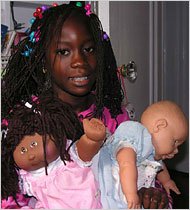 Sometimes it takes a city to heal a child.

Today, Nabu Ndiaye, an 8-year-old girl from Senegal, received a cochlear implant so she could hear again, after a bout of meningitis left her deaf at age 3. The cast of characters that worked to bring her here includes her family, a former city official, a special education teacher, a surgeon, an otiologist, a hospital and a classroom of Bronx children.

Nabu’s father, Cherif Ndiaye (the “d” is silent), is a freelance tour guide who supports his wife, mother, two children and several siblings on his part-time work. One of his clients is the American Jewish World Service, an international development association that supports grass-roots efforts and is run by Ruth W. Messinger, the former Manhattan borough president. When workers with the group met Mr. Ndiaye’s family, including Nabu, they dedicated themselves to helping her hear again.

One of them, Amy Alter, who teaches at Public School 105 in the Bronx, met Nabu about four years ago. When she tried teaching her some sign language, “she just gobbled it up,” Ms. Alter said. “I said, oh, my gosh, this child is really bright. I realized she needed something. And Ruth made her magic.”

To make it all happen, Ms. Messinger gathered support from Dr. Darius Kohan, the surgeon; Advanced Bionics, the implant manufacturer; Jane Madell, an audioloigst; Dr. Rony Shimony at Lenox Hill Hospital; Allan Fine, a vice president at New York Eye and Ear Infirmary, where the surgery was done; and other donors. Ms. Alter encouraged her students to contribute warm clothing for visitors who were used to a much more temperate climate.

Father and daughter arrived last Saturday and started meeting with doctors. When they gave her hearing aids to try, Mr. Ndiaye recalled: