Many disorders of the inner ear cause people to experience unpleasant symptoms such as dizziness, fullness, and even hearing loss, but for people with superior semicircular canal dehiscence (SSCD), the symptoms can be quite debilitating. A simple sneeze can trigger the frightening sensation that stationary objects are moving around you. Learn the causes, symptoms, and treatment options for superior semicircular canal dehiscence.

What Is Superior Semicircular Canal Dehiscence? 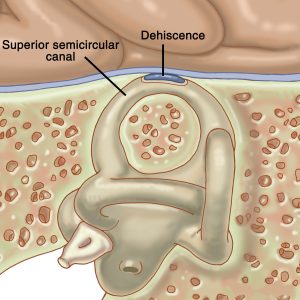 Medical experts believe the condition is caused by a developmental abnormality that affects approximately one in every 100 people.

What Are the Symptoms of Superior Semicircular Canal Dehiscence?

Many people with SSCD complain of a blocked sensation in one or both ears, some level of hearing loss, and hearing an echo when they speak, known as autophony. One of the most telling symptoms is dizziness, vertigo, and even uncontrolled up-and-down eye movements (oscillopsia) triggered by loud noises, low-frequency sounds, and physical exertion such as heavy lifting or running. The average age of patients who are diagnosed with superior semicircular canal dehiscence is 45.

How Do You Test for Superior Semicircular Canal Dehiscence? 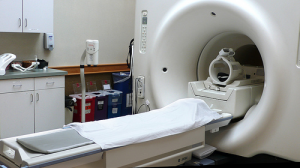 If your physician suspects SSCD, he or she will likely recommend Vestibular Evoked Myogenic Potential, or VEMP, testing to see if the inner ear organs and nerves are functioning properly. VEMP testing is a painless procedure that is performed in the doctor’s office. Typically, you are given a set of headphones to wear, and electrodes are attached to your forehead and neck. You hear a set of sounds or clicks in each ear, and the electrodes transmit the results to a report your doctor will use to diagnose SSCD.

In some cases, additional tests such as a CT scan or an MRI of the temporal bones are necessary to confirm SSCD. These painless outpatient tests take about an hour to complete.

What Are the Treatment Options for Superior Semicircular Canal Dehiscence?

For people with only mild symptoms of SSCD, treatment may be as simple as learning techniques to avoid triggers and manage dizziness. Your doctor may recommend a special hearing aid to correct conductive hearing loss.

However, for people who suffer chronic dizziness, visual disturbances, and other debilitating symptoms, surgical correction of the defect is the only effective treatment. Surgical treatment for SSCD involves one of two approaches: Plugging the canal or resurfacing the canal. Your doctor will help determine which option is best for you.

Most people who choose surgical correction for SSCD report that their symptoms have completely gone away or are substantially reduced after the procedure.

If you think you have symptoms of superior semicircular canal dehiscence, schedule a consultation with Dr. Darius Kohan, the leading ear specialist in New York City.