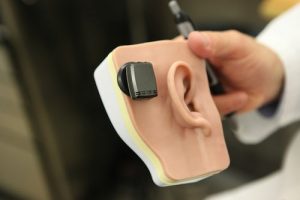 (New York. NY) – Mr. M of Westchester County had long learned to cope with the profound hearing loss in his left ear, but when he suddenly lost hearing in his right, the 95-year-old immediately acted on the news he so avidly reads and went to a doctor from The New York Eye and Ear Infirmary to pursue therapy. Conservative treatment was unable to restore his hearing thus he decided on cochlear implant surgery.

Darius Kohan. MD, a neuro-otologist who has performed over 300 such surgeries, will do the procedure on Friday, August 30, and expects that the device will be activated in three weeks allowing Mr. M to once again hear the voices of his children and grandchildren.

“While he is the oldest patient In New York State to receive a cochlear implant, he is happy to be treated like anybody else” said Dr. Kohan. “He will have the same state-of·the-art, quality implant as a baby. This is a great example of how the healthy elderly can and should have the best of care and quality of life at any age.”

From keeping up with the news. Mr. M knew that hearing loss in older adults can take a toll on physical health and mental functioning. After medical Intervention failed to restore his hearing. he quickly became hungry for communication and worried about the consequences.

“I am concerned that hearing loss can bring on senility,” he said, and “there is still too much I want to do with family and friends.” 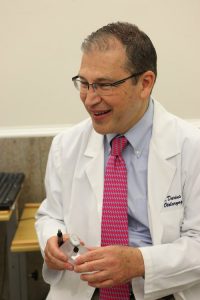 Family members currently carry a large laptop to write him messages. The implant will be done on an ambulatory (same day) surgery basis, with the actual operation taking about an hour. Hearing restoration with a cochlear implant is covered by Medicare.

About The New York Eye and Ear Infirmary

One of New York’s and the nation’s foremost specialized facilities, The New York Eye and Ear Infirmary (NYEE) provides comprehensive diagnosis and treatment of all related diseases and disorders of the eye, ear, nose, and throat as well cosmetic and reconstructive plastic surgery in a state-of-the-art hospital with a caring and friendly environment. Founded in 1820, it is the first and longest operating specialty hospital in the Western Hemisphere. With more than 31,000 surgical cases and 225,000 outpatient visits per year, it is also one of the largest and busiest.

One of NYEE’s notable “Centers of Excellence” is the Ear Institute, a collaborative staff of physicians, audiologists, educators of the deaf vestibular therapists, researchers, and other related professionals who offer comprehensive care for children, teens and adults with all forms of hearing loss, balance disorders and chronic ear disease. Its Cochlear Implant Center is one of the largest in the United States and implants children as young as six months and adults into their 90s.