Last year Dr. Kohan was able to reconstruct the hearing of a young harlem man and provide the gift of sound to him. As only one of 20 people to receive a bone anchored hearing aid last year terrell davis can not hear for the first time at the age of 20. 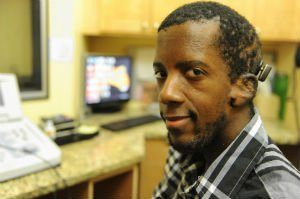 A 20-year-old Harlem student who has spent the majority of his life in silence has been given the chance to hear clearly after being fitted with a state-of-the-art hearing aid.

Terrell Davis, who is legally deaf, was fitted Tuesday with a cutting-edge, magnetic, bone-anchored hearing aid at Lenox Hill Hospital.

“It’s so exciting for us,” his mother Brenda said. “It’s the one thing that he wanted.”

Davis, a shy, soft-spoken young man, let his mother do most of the talking at his activation with audiologist Philip Vazquez on Tuesday. “(He’s) a man of little words, but he’s very moved,” Brenda said.

Davis, the youngest of three sons, was born with two malfunctioning ears. His right one looked normal but did not work. His left ear canal was full of bone and the outer ear was missing. He barely heard over the years, communicating verbally at home and via sign language in public. 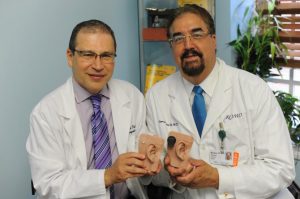 The new implant comes at an emotional time for Davis. On June 25, he turns 21. The following day, he graduates from 47 The American Sign Language and English Secondary School, and will hear his name called out in public for the first time ever.

When his mother was diagnosed with colon cancer in 2002, she knew more needed to be done in case anything ever happened to her.

“He has to live in this world,” she says about her son, who loves to cook and is taking culinary classes. “I wanted to be sure that Terrell was gonna be OK. I can’t protect him forever.”

Brenda — who has cancer that is now in remission — had heard about the Little Baby Face Foundation, which provides indigent children free reconstructive surgery for any facial deformity. She contacted the organization and connected with Diane Romo, the wife of Dr. Thomas Romo, director of Facial Plastic and Reconstructive Surgery at Lenox Hill Hospital and the Manhattan Eye, Ear and Throat Hospital.